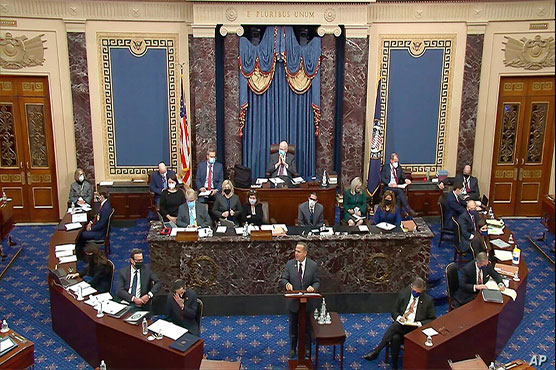 Washington: The US Senate voted to proceed with the impeachment trial of former president Donald Trump, rejecting defense arguments that it was unconstitutional.

Defense lawyers had argued that Trump should not face a trial in the Senate for inciting insurrection because he was no longer president.

But the Senate voted 56-44 to proceed with the trial, with six Republicans joining Democratic lawmakers.

Donald Trump s second impeachment trial began Tuesday with harrowing video footage of his supporters  assault on Congress, but Republican senators made clear how difficult it will be to win a conviction.

Senators voted 56-44 in favor of the constitutionality of the historic trial, rejecting a bid by Trump s lawyers to throw it out on grounds that a former president cannot be tried by lawmakers.

The vote, held before the main part of the trial was to get underway Wednesday, saw six Republicans join all 50 Democrats in the evenly divided Senate.

Despite this modest show of bipartisanship, the result highlighted the nearly impossible task of getting the two thirds majority — requiring 17 Republicans to join the Democrats — that would be needed to convict Trump of inciting insurrection.

Earlier, both sides presented their opening cases, with Democrats arguing that Trump broke his oath in a naked bid to retain power after losing the November election to Joe Biden.

Refusing to accept his defeat, Trump spread lies about vote rigging and repeatedly pressured officials, including then vice president Mike Pence, to try and stop the transfer of power.

Finally, on January 6, Trump told enraged Republican supporters near the White House to “fight like hell.” The crowd, chanting “stop the steal,” then attacked Congress, where Pence and lawmakers were in the process of certifying Biden s victory.

“If Congress were to just stand completely aside in the face of such an extraordinary crime against the Republic, it would invite future presidents to use their power without any fear of accountability,” Democratic impeachment manager Joe Neguse said. Video from the January 6 mayhem played back inside the ornate Senate packed the biggest punch.

Senators — who witnessed the events first hand when they had to be rushed to safety that day — watched raw footage of Trump s speech and the crowd s ensuing assault on the Capitol.

The video montage showed the mob chanting pro-Trump slogans as it smashed through the doors, swarmed over police, and managed for the first time in history to disrupt the congressional vote certifying the election.

“If that s not an impeachable offense, then there is no such thing,” lead impeachment manager Jamie Raskin said. Reuters.