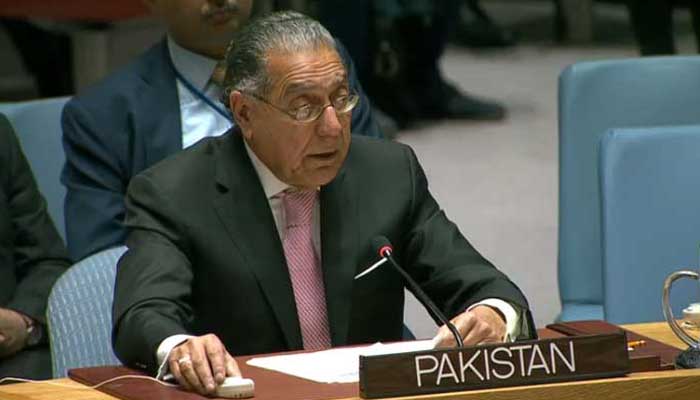 New York: Pakistan’s Ambassador to the UN Munir Akram told the 15-member Security Council that “violent extremist supremacist groups” should be outlawed like other terrorist outfits.

“Such violent racist and extremist terrorism will inevitably breed counter-violence and validate the dystopian narrative of terrorist organisations such as ISIS/Daesh and Al-Qaeda,” Akram said at the UNSC.

He also cautioned that the Hindutva ideology which is followed by the BJP, a Hindu nationalist party, threatened India’s Muslim population.

The Pakistani envoy called for immediate steps to curb the rise of violent nationalism and proposed the following measures:

calling on states to designate acts of violent nationalist groups, including white supremacists and other racially and ethnically motivated groups, as terrorism, just as the world has done in case of Al-Qaeda/ISIS and their affiliated groups

initiating immediate domestic actions to prevent the propagation of their violent ideologies, recruitment to and financing of these groups

Akram also called upon the body to “address certain neglected manifestations of terrorism, one of which is the phenomenon of ‘state terrorism’”, citing the situation in occupied Kashmir where Indian forces “are perpetrating war crimes, crimes against humanity, and against the occupied peoples in order to terrorise them into submission”.

As new threats to global peace and security arise, Akram said, the world needs to expand and adjust its counter-terror strategy to “defeat terrorism in all forms and manifestations”.

This is not the first time Pakistan has highlighted the threat posed by nationalist groups, particularly the BJP and RSS. Prime Minister Imran Khan has repeatedly urged the world to take note of BJP’s “racist” ideology, which, according to the premier, is inspired by the Nazis. The incumbent government has highlighted the Indian government’s moves that critics say discriminate against minorities, especially Muslims.

In its years in power, the BJP government stripped occupied Kashmir of its special status, a move which ignited a diplomatic rift between India and Pakistan. The abrogation of Article 370 of the Constitution followed a strict clampdown that confined residents to their homes for months. Kashmiris as well as critics believe the move is an attempt to dilute the demographics of Muslim-majority Kashmir with Hindu settlers. APP