Why are India’s farmers angry? 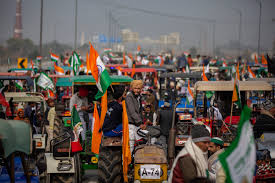 New Delhi: Despite rain and cold, tens of thousands of angry farmers have been camping on the borders of New Delhi for six weeks. In late September, Prime Minister Narendra Modi’s government hurriedly passed a set of new farm laws in the Indian Parliament. Soon after, protests started in the northern Indian states of Punjab and Haryana, which constitute 3 percent of the country’s land area but produce close to 50 percent of its surplus of rice and wheat.

With the government largely ignoring the protests so long as they were largely confined to Punjab, the farmers headed to Delhi at the end of November. Thousands of farmers on tractors swept through the barriers erected and trenches dug by the police to stop them. Water cannons did not deter them. They set up temporary townships, where thousands are being housed and fed among parked tractors and trolleys, free laundromats have been installed, and even foot massagers are being offered after a long day of protest.

For the first time in six years, Mr. Modi is encountering opposition that he has not been able to stifle or tar with his extensive propaganda machinery. His government has toned down the initial rhetoric against the protesters and entered into eight rounds of talks with the protesting farmers, but there has been little substantive progress.

The protesters point to the state of Bihar in the east of the country, where similar laws were enacted 15 years ago. Those laws led to dismantling of the government marketing infrastructure, with the number of sales centers declining by 87 percent. The markets never offered the promised better remuneration for the produce. Farmers in Punjab sold their rice last year for the government-mandated price of $25 for 100 kilograms, while farmers in Bihar were forced to sell for $16 for 100 kilograms on the open market.

The farmers fear that under the new laws, smaller private traders will be replaced by larger corporations, significantly diminishing their ability to negotiate prices on equal terms. Clauses in the new laws that forbid any legal recourse through the courts for disputes heighten such apprehensions.

The protesters have vented their anger against giant corporations such as Mukesh D. Ambani’s all-powerful Reliance Industries and the Adani Group, led by Gautam Adani, who is known to be close to Mr. Modi. In Punjab, the government was forced to deploy the police to prevent the dismantling of cellphone towers that sustain the Reliance network in the state, and the corporation issued a statement saying it had no plans to enter contract farming.

The system of government purchase of food grains through marketing boards that the farmers see unraveling with the entry of large corporations was born out of India’s struggle to feed its huge population.

India was a food-deficit nation when it won its independence from Britain in 1947. After a series of crop shortages and famine-like conditions, in the early 1960s, India boosted its production of food grain by relying on new hybrid high-yield varieties of wheat and rice. They were cultivated through mechanized farming backed by intensive use of chemical fertilizers.

The northern Indian states of Punjab and Haryana were best suited to adopt the new methods. The farmers there owned the land they farmed and had larger holdings compared with farmers in other Indian states, where feudal landlords leased tiny pockets of land to tenant farmers and didn’t bother to invest in mechanization.

A government-backed system of assured prices encouraged farmers in Punjab and Haryana to grow rice, and it provided better returns than any alternative. Over the next decade yields in the two states grew spectacularly, and India almost completely stopped importing rice and only occasionally bought wheat in a bad crop year.

The bountiful rice production in Punjab and Haryana helped India cope with hunger and malnutrition with the establishment of the Public Distribution System, a government program of food disbursement. The government bought much of the surplus food grain from the farmers through the marketing boards at assured prices and supplied it at subsidized rates to a large part of India’s population.

Over the years, in Punjab and parts of Haryana, the increased cultivation of rice, which relies on the extensive use of groundwater, has pushed the water table down by hundreds of feet. The copious use of fertilizers and pesticides has laced the aquifers and the soil with chemicals.

Farmers in these states face a situation that can’t be addressed by corporations but requires greater governmental involvement. Instead, they see laws empowering corporations while reducing the government’s role, which has brought them to Delhi to challenge Mr. Modi’s government.

Initially Mr. Modi and his government responded by trying to discredit the mostly Sikh protesters. Ministers of the government labeled many of the protesters Khalistanis, a reference to a fringe right-wing religious movement that wants an independent country for the Sikhs.

The Sikh distaste for the Hindu nationalist project that Mr. Modi espouses has ensured that attempts to co-opt them as part of a discourse that leaves out Muslims and Christians have largely failed. The Sikh peasantry’s history of mobilizations and protests over agricultural issues goes back over a century. An upsurge uncannily similar to the continuing protests forced the British rulers to take back laws that challenged ownership of the land in Punjab in 1907.

In the 1970s, when Prime Minister Indira Gandhi became increasingly authoritarian and suspended fundamental rights, a broad national opposition against her included the Hindu nationalists and the Sikhs, along with socialists and other groups.

Mrs. Gandhi’s subsequent attempt to break the political power of those who had led the protests in Punjab against her misrule saw her dabble in Sikh radical politics. She propped up a new right-wing Sikh leadership and then attempted to clamp down on it. Events spiraled out of control into an armed insurrection that was put down after a decade at a heavy cost. Tens of thousands lost their lives, among them Mrs. Gandhi, who was assassinated.

If Mr. Modi’s government is hoping that the protests will fade away, it is unlikely to happen. The farmers, having sown their wheat crops a month ago, are relatively free to pursue their agitation well past March. And they have a supply chain that will keep them fed on Delhi’s borders for as long as they care to be here.

The Supreme Court of India has intervened by staying the administration of the new laws and setting up a committee that is to discuss issues with the government and the farmers and submit a report within two months. The farm unions have made it clear they will not participate in the process because the committee’s four members have already publicly stated their support for the new laws.

The onus is now on Mr. Modi. It remains to be seen how far he will go to guard his image as a leader who never loses face. New York Times

Pakistan supports peaceful resolution of conflicts for stability in region:...