World must stop Modi’s militarist agenda before a conflict in region: PM 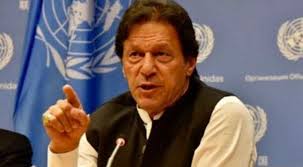 Referring to the revealed chat of Indian journalist Arnab Goswami, the prime minister said on Twitter that Modi-media nexus had led to military misadventurism to win an election in utter disregard for the consequences of destabilising the entire region.

The prime minister said in 2019, he had spoken at United Nations General Assembly on how India’s fascist Modi government used the Balakot crisis for domestic electoral gains.

Latest revelations from communication of an Indian journalist, known for his warmongering, reveal the unholy nexus between the Modi govt & Indian media that led to a dangerous military adventurism to win an election in utter disregard for the consequences of destabilising the entire region,” the prime minister remarked.

He said Pakistan averted a larger crisis by a responsible and measured response to Balakot incident. “Yet, Modi (government) continues to turn India into a rogue state,” he said.

Imran Khan said Indian sponsorship of terrorism in Pakistan, its abuses in Indian Illegally Occupied Jammu and Kashmir and a 15-year Indian global disinformation campaign against us all stand exposed. The prime minister said now India’s own media had revealed the dirty nexus that was pushing the nuclearised region to the brink of a conflict it could not afford. The Nation