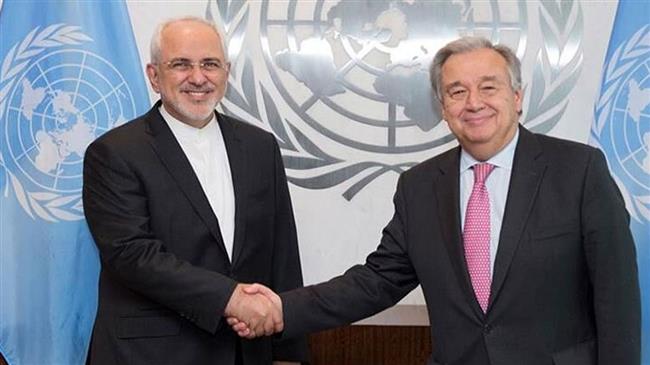 Tehran: Iranian Foreign Minister Mohammad Javad Zarif and United Nations Secretary General Antonio Guterres called for the start of peace talks in Yemen in order to put an end to the protracted Saudi-led war and siege on the country.

In a phone conversation, Zarif and Guterres discussed the latest steps taken by the United Nations to end the war and restore peace in Yemen as well as efforts to start dialogue among all political parties in the country.

The UN chief called for the continuation of the prominent efforts of Iran in helping to establish peace in the war-ravaged Yemen, according to Press TV.

Zarif expressed Tehran’s support for UN efforts to restore peace in Yemen, stressing the need for an end to the Saudi war of aggression, lifting the blockade and providing humanitarian assistance to the Yemeni people.

The chief Iranian diplomat also expressed hope for the establishment of peace and stability in Yemen through holding intra-Yemeni talks and forming an inclusive government.

In April 2015, Iran presented a plan to the UN in a bid to end the conflict in Yemen. The proposal calls for international action to put an end to the Saudi-led airstrikes against Yemen.

The four-point Yemen peace plan Iran brought before the United Nations called for the cessation of hostilities and an immediate end to all foreign military attacks, direct delivery of medical and humanitarian aid, the resumption of political talks and the creation of a broad Yemeni unity government.

“It is imperative for the international community to get more effectively involved in ending the senseless aerial attacks and establishing a ceasefire,” Zarif wrote in a letter to the UN chief Ban Ki-moon.

“The only way to restore peace and stability is to allow all Yemeni parties to establish, without any foreign interference, their own inclusive national unity government,” the letter said.

Saudi Arabia and a number of its regional allies launched the war on Yemen in March 2015 with the goal of bringing the government of former Mansour al-Hadi government back to power and crushing the popular Ansarullah movement.

According to a new report by the United Nations, 80 percent of Yemen’s 30 million people need some form of aid or protection. About 13.5 million Yemenis currently face acute food insecurity, UN data shows.

According to the latest figures released by the UN in December last year, over 230,000 people have been killed since the onset of the Saudi-led war.

The war has also taken a heavy toll on the country’s infrastructure, destroying hospitals, schools, and factories.

Some incidents of the Saudi air war on Yemen constitute examples of war crimes.

The U.S. and certain other Western countries are an accomplice in the war crimes against the Yemeni civilians.

In August 2018, munitions experts told CNN that the bomb used by the Saudi-led coalition in the devastating attack on a school bus in Yemen was sold as part of a U.S. State Department-sanctioned arms deal with Saudi Arabia.

Working with local Yemeni journalists and munitions experts, CNN established that the weapon that left dozens of children dead on August 9, 2018 was a 500-pound (227 kilogram) laser-guided MK 82 bomb made by Lockheed Martin, one of the top U.S. defense contractors.

The bomb was very similar to the one that wreaked devastation in an attack on a funeral hall in Yemen in October 2016 in which 155 people were killed and hundreds more wounded.

In March of that year, a strike on a Yemeni market — this time reportedly by a U.S.-supplied precision-guided MK 84 bomb — killed 97 people.

Also in April 2018, an airstrike by the Saudi-led coalition hit a wedding party in northern Yemen, killing at least 20 people. Local officials told the Associated Press that most of the dead were women and children who were gathered in one of the tents set up for the wedding party in the district of Bani Qayis. He said the bride was among the dead.

‘Cutting aid is a death sentence’

In a related development on Tuesday, aid groups warned of worsening humanitarian situation in Yemen after a UN appeal for more funds for the war-torn country fell short of reaching its goal.

The UN secretary-general said a “disappointing” $1.7 billion had been pledged by countries on Monday for humanitarian aid in Yemen – less than half the $3.85 billion the world body was seeking for 2021 to avert a large-scale famine.

“For most people, life in Yemen is now unbearable. Childhood in Yemen is a special kind of hell. Yemeni children are starving,” Guterres said, according to Reuters. Tehran Times