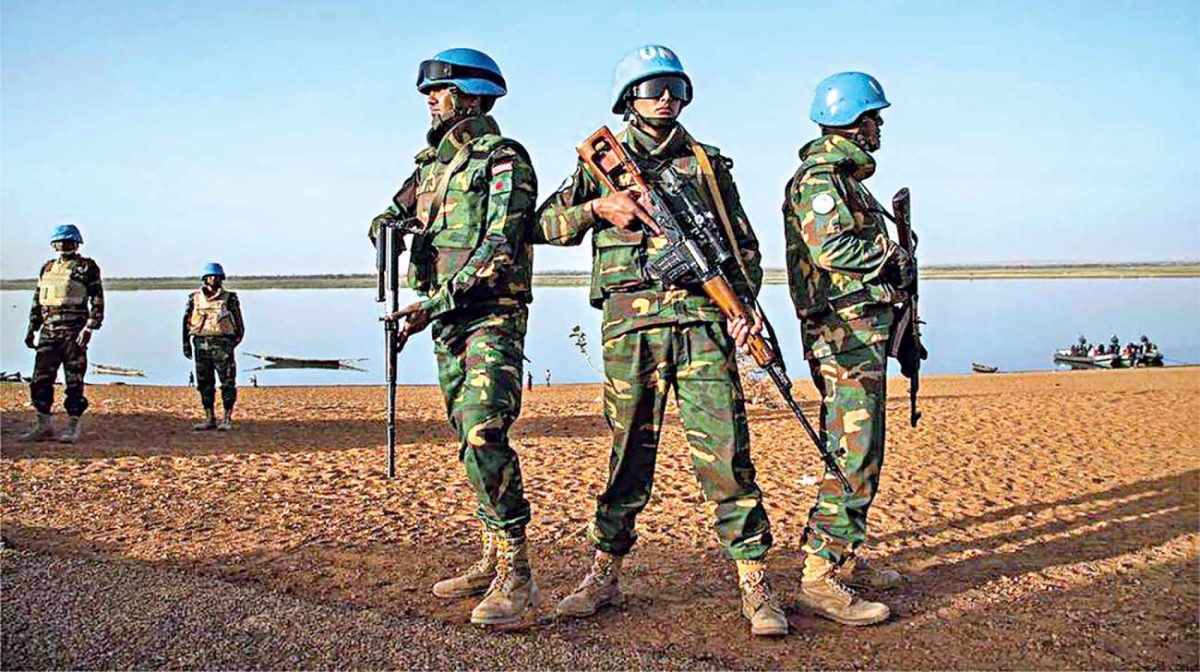 While celebrating its golden jubilee of independence on March 26, 2021, Bangladesh can take pride in many remarkable achievements in its growth and development. One of its striking achievements is its role in United Nations Peacekeeping Operations (UNPKO). Bangladesh’s participation in UN peacekeeping operations began after 17 years of her independence. By then, the UN had crossed 40 years of its peacekeeping efforts, with 14 missions launched.

This article aims to briefly highlight how UNPKO has evolved and adapted, as well as how Bangladesh has reciprocated since her participation in 1988. It also touches upon the salient role Bangladesh has played in UNPKO and its impact while providing some insights on how the role can be strengthened. The intention is not to go into details and specifics but to provide a holistic view for general readers.

The United Nations came into being in 1945, with the central mission of maintaining international peace and security, following the devastation in the aftermath of the Second World War. Since then, the UN has been working for preventive diplomacy, peacekeeping (now termed as peace operations), peace-building, counterterrorism and disarmament. Though these activities often overlap and reinforce each other, peace operations have proved to be one of the most effective means of assisting troubled nations transition from conflict to peace. Nonetheless, peace operations support the process of conflict resolution, but are not the only means of conflict resolution.

UNPKO were employed at a time when Cold War rivalries frequently paralysed the Security Council. Since its first deployment in 1948 in the Middle East, the UN has launched 71 peace operations deploying more than one million women and men from 125 member states. The lengthy evolution of UNPKO has gone through several phases, i.e., early experiences (1948-1963), Cold War peacekeeping (1964-1991), post-Cold War peacekeeping (1992-2000) and 21st century peacekeeping (2000-continuing). Considering the pattern of deployment, UNPKO were also often classified into four categories i.e., deployment of observers, interposition of troops between warring factions, deployment of multi-dimensional forces and installation of transitional administrations. Conceptually, UNPKO were launched to mitigate the interstate conflicts. Later, they were increasingly applied to intrastate conflicts and civil wars.

In the Cold War era, UNPKO were primarily limited to maintaining ceasefire and stabilising situations on the ground. The end of Cold War brought about significant changes in the strategic context, with a surge in UNPKO missions (a total of 36 from 1991 to 2000) raising peacekeeper numbers manifold. But in the mid-nineties, failure in a few of the missions, especially in Bosnia Herzegovina, Rwanda, and Somalia, led to a period of assessment and regrouping through the Brahimi Report 2000. This led the UN to shift and expand its operations from traditional missions of strictly military tasks to complex multi-dimensional tasks involving peacekeeping, peace enforcement, peace-building, etc. By 2010, UNPKO entered a phase of consolidation and numbers of missions began to decline.

Observing all the UN missions in their entirety, we see that geographically, 31 missions (44 percent) were launched in Africa, 20 in Asia (10 being in the Middle East) and the remaining 20 were in Europe and South America. Out of the 71 missions, 59 were closed with mostly success (as per UN data). Five out of 12 existing missions are long-drawn-out missions launched four decades ago with no resolution in sight. Nevertheless, the UN has continued to evaluate its peace operations to cope with the growing needs, and the High-level Independent Panel on Peace Operations (HIPPO), formed in 2015, was one such latest initiative.

Despite being a late entrant (in 1988) as a troop contributor, Bangladesh has emerged as a credible UN partner over the last three decades. Since 1988, Bangladesh has participated in 54 peacekeeping missions in 40 different countries over 5 continents with more than 175,000 uniformed personnel, including over 1,800 female peacekeepers. Currently, there are over 7,000 troops and police deployed in 10 missions (as per data from the Armed Forces Division). Most of the peacekeepers of Bangladesh were deployed in Africa. Over time, Bangladeshi peacekeepers have gone through many difficult and trying situations in a number of UNPKO e.g., Cambodia, Bosnia Herzegovina, Somalia, Sierra Leone, Cote d’Ivoire, MONUC (Congo), etc., where they have held the UN flag high and steadfast. As the UNPKO have been evolving continuously, Bangladesh has regularly been carrying out the performance appraisal of its peacekeepers and taking measures to cope with future challenges. Services and police have developed the best practices from the lessons drawn. Bangladesh established the Institute of Peace Support Operations Training (BIPSOT) in 1999 and the Bangladesh Peacebuilding Centre (BPC) in 2016 to facilitate peace operations training.

Bangladesh’s role as one of the top troop-contributing countries to UN peacekeeping has generated discussions amongst experts and academia. Some opine that Bangladesh in UNPKO derives international and political prestige as well as economic and institutional benefits. A few argue that, the participation of Bangladesh has produced positive benefits for civil-military relations in the country. Nonetheless, Bangladesh’s role in UN peacekeeping is an extension of its international obligations. Besides military gains, Bangladesh’s positive and active role has also earned the nation international reputation with political and diplomatic mileage and is well-recognised and credible to UN and other international actors. It is appreciated that the country will continue to contribute as long as UNPKO continue. However, the gains attained need to be consolidated and strengthened.

There had been many recommendations placed in various articles, both at macro and micro level. Let us focus on four areas (a few may be repetitive in different forms). Firstly, we should have a defined National Policy on UNPKO articulating strategic objectives and synchronising the contribution of various actors. This was well debated by two academics in 2017 (Prof. Rashed Uz Zaman, Dhaka University and Prof. Niloy Ranjan Biswas, Dhaka University)

Secondly, there is a need for redefining and synchronising the roles of various stakeholders e.g., ministries, armed forces, police, think tanks and training institutes. Understandably, this will be part of national policy when formulated, but needs immediate attention. Although service roles are coordinated by the Armed Forces Division, there is limited interaction with police at home. However, the Ministry of Foreign Affairs (MOFA) and the Defence Wing of the Permanent Mission of Bangladesh to United Nations, New York oversee and coordinate all deployments. BIPSOT is doing an excellent job in imparting operational training to the peacekeepers and is internationally recognised. The roles of BIISS (as a think tank) and BPC need to be articulated and geared up to attain national objectives in UNPKO.

Thirdly, as discussed earlier, there are various actors and civil faces, besides military and police, in the current generation of peacekeeping. They are administrators, economists, legal experts, electoral observers, human rights monitors, civil affair and government specialists, humanitarian workers, communication, public information experts, etc. Reportedly, Bangladesh’s participation in these fields is insignificant. We have qualified people but need state/diplomatic sponsorship. In addition, the need for proportionate representation at the leadership level remains. Despite being one of the top troop-contributing countries for decades, there has been a trivial number of mission leaderships (administration and forces) by Bangladesh. National leadership and MOFA should sensitise relevant stakeholders.

Last but not the least, there is an urgent need to record Bangladesh’s remarkable work in UNPKO or else, facts will phase out like those of the War of Liberation 1971 and Counter Insurgency operations in Chittagong Hill Tracts. Academic discourse on Bangladesh’s contribution to UNPKO is barely visible. It is good to see that many peacekeepers have started writing about their experiences and a few are conducting research. Organisations are occasionally holding seminars and symposiums and also publishing journals. There are academics coming forward to study UNPKO and Bangladesh’s participation in them. Understandably, these efforts need to be coordinated and articulated officially. More academics and experts should be sponsored to do this. Brig Gen Ilyas Iftikhar Rasul is former Defence Adviser, Permanent Mission of Bangladesh to UN, New York. The Daily Star.net