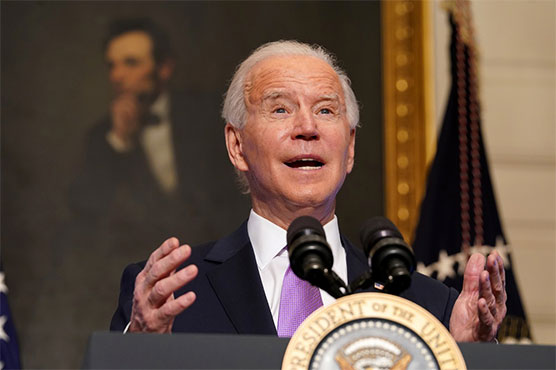 Washington: US President Joe Biden ran supporting a return to diplomacy with Iran but made clear he will not be rushed into re-entering a 2015 nuclear deal trashed by Donald Trump.

Nonetheless, a series of dates are coming up that will force the new US administration to show its hand.

The Biden administration has repeatedly said it will return to full compliance with the deal, formally known as the Joint Comprehensive Agreement Plan of Action (JCPOA), once Iran does.

In other words, Biden will lift draconian sanctions imposed by Trump only after the clerical regime reverses nuclear steps it took to protest those sanctions.

Iran, likely mindful of the widespread hostility it faces in Washington, wants to ensure an end to sanctions before it backs down on steps away from the nuclear commitments, which included enriching uranium beyond agreed limits.

A key date comes on February 21 when Iran, under a law passed in December by the conservative-led parliament, is set to stop allowing intrusive inspections by the International Atomic Energy Agency unless there is an easing of US sanctions.

Kelsey Davenport, director for nonproliferation policy at the Arms Control Association in Washington, said that Iran can quickly undo most steps such as uranium enrichment.

“But the steps that are coming, I think, do pose a more significant risk and are more difficult to reverse,” she said.

While Iran has stopped short of threatening to expel IAEA inspectors, Davenport worried that any loss of access would fuel speculation that Tehran is engaged in illicit activities.

The risk “underscores the importance of restoring full compliance with the JCPOA before Iran takes these steps and develops this new knowledge,” she said.

Another key date is in June when Iran holds elections that could bring to power a hardliner to succeed President Hassan Rouhani, who bet on engagement with the West when Barack Obama was president only to see tensions soar under Trump.

With February 21 fast approaching, “it is imperative that diplomacy happens,” a former European Union diplomat said.

“The next 10 days will be important to give us an idea of what is occurring and how successful it will be” in persuading Iran to step back, the diplomat said.

“The entire issue is to make sure that the threshold is not crossed on that date,” said another European diplomat.

The diplomat said that position was shared by Russia and China, which are also signatories to the JCPOA but enjoy much closer relations with Iran than Western powers.

Jon Wolfsthal, who advised Biden when he was Obama s vice president, said that the United States and Iran, along with other JCPOA nations, could issue a statement before February 21 “that would show their mutual intent to return to full compliance.”

But while action would be best as soon as possible, he doubted that decision-making would fundamentally change after the elections in Iran, where Supreme Leader Ayatollah Ali Khamenei has final say.

“I don t think the United States is going to say, Oh, we have to give away everything we have to do everything, because after June it s impossible,” said Wolfsthal, now at the anti-nuclear weapon movement Global Zero.

State Department spokesman Ned Price reiterated Friday that the United States is “not looking at any particular deadline” when asked about February 21.

The Biden administration has named a special envoy on Iran, Rob Malley, one of the architects of the JCPOA.

Officially his first task has been coordination with the Europeans and he will only afterward revive US dialogue with Iran that was ended under Trump.

But one former adviser to Obama, speaking on condition of anonymity, said, “I suspect that US officials have already engaged with Iranian officials in some number of ways.”

Thomas Countryman, who was a top arms control official in the Obama administration, said that Biden could immediately lift some sanctions to show good faith.

With help from the Europeans, the United States and Iran could also lay out the steps they will take, he said.

“Because of the domestic political situation in both countries, I think they ve got to find a way to say, we did not give in to pressure,” Countryman said.

Other steps that the United States could take, observers say, could include offering Iran badly needed Covid-19 vaccines or dropping Trump-era objections to the International Monetary Fund lending money to Tehran to fight the pandemic. AFP

Disengagement in Ladakh is surrender to China,’ says former Defence...