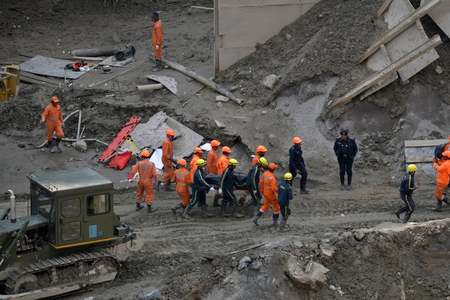 With dozens killed, the fighting has cast major doubt over UN-led efforts to restart negotiations to end years of civil war.

The rebels earlier this month renewed their attack on the oil-rich province, an anti-Houthi stronghold held by the internationally recognised government. But they faced stiff resistance and have not made progress amid heavy causalities mostly from the Houthis, military officials from both sides said.

Yemen’s war started in 2014, when the rebels seized the capital, Sanaa, and much of the country’s north. A Saudi-led, US-backed intervened months later to dislodge the Houthis and restore the internationally recognised government. The conflict has killed some 130,000 people and spawned the worlds worst humanitarian disaster.

The rebels seek to wrestle control of Marib, closing off Saudi-Arabia’s southern border and taking control of oil fields in the province that would give them leverage in possible peace negotiations.

Alarmed by the Houthis renewed push, the Saudi-led coalition bombed their advancing convoys in the sprawling desert around Marib. It also brought in ground enforcements from the government-held provinces of Taiz and Shabwa, the officials said.

The Houthis media office reported at least 10 airstrikes by the Saudi-led coalition in Marib, and two more airstrikes on the neighbouring province of Jaw, which the rebels use as base to launch their latest attack in Marib.

More than 48 fighters were killed and over 120 were wounded in the past two days, mostly Houthis, the officials said. Over two dozen others were reported killed at the start of the attack, which has mostly centered in the districts of Sorouh and Makhdara, they added. The rebels have been marching towards Marib since the beginning of 2020, attacking the city from several sides and putting a burgeoning civilian population at risk.

The province, which houses the ancient Great Marib Dam, has served as a sort of haven for hundreds of thousands of Yemenis who have fled Houthi offensives since the start of the war. A bout of violence last year also displaced thousands of families.

The fighting in Marib could also thwart renewed efforts by the UN to re-launch negotiations between the warring sides. They have not held substantive negotiations since 2019.

UN envoy Martin Griffiths said last week he was extremely concerned about hostilities in Marib, especially at a time of renewed diplomatic momentum, in an apparent reference to the latest measures US President Joe Biden’s administration have taken on Yemen’s conflict.

President Joe Biden has turned a spotlight on the brutal conflict, declaring earlier this month that the United States would end its support of the Saudi-led military offensive, including relevant arms sales. The administration has also moved to lift a terrorist designation against the Houthis, citing the need to mitigate Yemen’s humanitarian crisis. AP