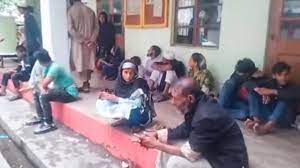 Guwahati: The Assam Police have detained 26 Myanmar nationals after they entered the Assam state.

26 Rohingya Muslims reached in the state’s capital Guwahati in a train from occupied Jammu and Kashmir.

The Assam police arrested them when they entered the Silchar city in a car.

Many Rohingyas had fled Myanmar due to persecution. Many of them have taken refuge in occupied Jammu and Kashmir from where they eventually moved to Delhi and then towards Assam.

Police claimed they believe the 26 Rohingyas who they have detained may have been trying to enter Bangladesh from either southern Assam or Tripura. Web Desk