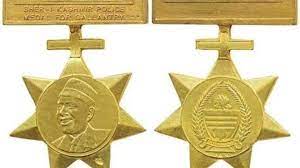 Srinagar: The government announced that the image of NC founder and former chief minister ‘Sher-i-Kashmir’ Sheikh Abdullah embossed on the J&K Police medals for gallantry and meritorious service will be replaced with the national emblem.

India under Modi has decided to consider every Kashmiri, be he or she pro or anti-India, as potential enemy if he/she has a Muslim sounding name. In one such latest development, the proxies of Modi regime in IIOJK has replaced the picture of National Conference founder Sheikh Muhammad Abdullah, towering pro-India figure in the territory, embossed on the local police medal for “gallantry/meritorious services “with the “national emblem of India”.

Home department ordered that “the Sher-i-Kashmir Sheikh Mohammad Abdullah embossed on the medal shall be replaced with the National Emblem of Government of India”. After the abrogation of Article 370 and 35A, J&K government has scrapped the state holiday commemorating the birth anniversary of Sheikh Mohammad Abdullah also known as ‘Sher-i-Kashmir.’ Political parties in IIOJK have expressed outrage over the Modi administration’s decision to replace the image of National Conference (NC) founder with the national emblem, in Police medals from this year.

NC spokesperson Sarah Hayat Shah said, “Efforts are being made to tamper the rich history of Kashmir. Dropping Sher-e-Kashmir’s name from the gallantry awards in the absence of an elected government would mean imposing laws without the consent of the people, which in a democracy is unacceptable”. Another NC leader Tanvir Sadiq Tweeted, “As John F Kennedy said, “A man may die, nations may rise and fall, but an idea lives on. Ideas have endurance without death. Sher-e-Kashmir is not just a prefix that you can erase. Sher-e-Kashmir was, is and will always be the only Sher-e-Kashmir”. Senior Peoples’ Democratic Party leader Naeem Akhtar condemned the move. Mr. Akhtar said, “Sheikh Abdullah is another Aurangzeb for BJP.

The man without whom Kashmir may not have acceded to India ‘demonetized’, as the Sher-i-Kashmir is replaced with the national emblem.” PDP President Mehbooba Mufti said, it showed the “narrow-mindedness of the rulers”. “It was the Sheikh who took the big and bold decision to accede to secular India in opposition to the ‘Two-Nation Theory’. And the same name is now being erased”.  Communist Party of India-Marxist (CPI-M) leader M. Y. Tarigami said, the “BJP’s Panglossian view of rewriting history by name changing” may favour its narrow communal agenda but would not absolve its complicity from the annals of history. “You cannot erase the contributions and historical significance of Sher-i-Kashmir by petty name changing gimmicks.” In 2020, Modi administration had dropped Sheikh Abdullah’s birth anniversary from the list of holidays and removed his title ‘Sher-i-Kashmir’ from the Police awards. Web Desk