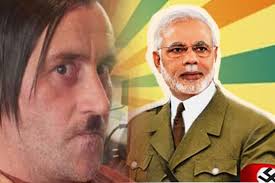 India has become the largest modern-day Roman amphitheater where the minorities, mostly Muslims and Dalits, are mocked and eviscerated, both mentally and physically. Amidst the loud chants of Bharat Mata ki Jai and Jai Sri Ram, the victims are put to death with brutal torture; even nuns and pregnant women are not spared in this gruesome BJP political arena.

A fake surgical strike across the border or instigation of the Shia-Sunni massacre in Pakistan is a known strategy in Modi’s political book aimed at diverting attention from his failures. Pakistan-bashing and killing of minorities is Modi’s shortcut to success. The Hindu goons groomed under RSS ideology show no mercy; men, women and children are thrown off running trains, burnt alive and raped on the pretext of violating the BJP-introduced law of respecting cows or loving jihad. No wonder the educated Hindus claim that cows and monkeys enjoy more rights than the Muslims and Dalit minorities do.

Caste inequalities and injustice ingrained in the Hindu scriptures added with illiteracy has shaped the Hindu ‘Taliban’ minds goading them to worship the street monkeys, snakes, rats and killing minorities to gaining credit for the heavens. The Hindus confused by the anomalies in their political scriptures is enough for them to justify their crimes in everyday life. Raping, killing and burning Dalits and Muslims is sanctified by the BJP high priests. The UP government run by BJP’s priest, Yogi Adyanath, is a perfect example of the Hindu ‘Taliban’ who is following the footsteps of Adolf Hitler. Yogi’s gangs are following the laws of ‘purification’ and converting Christians or Muslims to Hinduism. Villagers and Dalits have their women raped if they do not convert to lower caste Hindus.

Adityanath is Modi’s right hand; he has been in jail for serious crimes including murder. He was released due to political backing. NHRC and UN experts based in India reported 59 cases of extrajudicial killings of minorities in fake encounters. Instigating Hindu mobs by hate speech, Yogi endorsed raping Muslims in public. “Hindu audiences should dig graves of Muslim women and rape their corpses”. Yogi’s threats were not confined to ordinary Muslims, but he also threatened Bollywood’s Muslim actors.

The cheap labour industry is run by the sweat of Muslim and Dalit labour. 250 million Dalits provide a ready base for Indian industry and brothels. India avoids discussion on world forums claiming it as India’s internal affairs or family affairs, and ensures a ready supply of cheap labour by never implementing laws to protect minorities. Devadasi and Jogini systems are a form of religiously sanctioned sexual abuse. Originally a sacred, religious practice, the Devadasi dedication of girls to temples has turned into the systematic abuse of Dalit girls serving as prostitutes for dominant caste community members. Most girls and women urban brothels come from Dalit or minority communities”, reports a prestigious India based human rights NGO.

A survey by Thomas Reuters Foundation in 2018 ranked India as the most dangerous country for women in the world with 88 rapes per day and a conviction rate of 30% only. Most of the rapes of Dalits are reported in Hindu temples, while upper-class Hindu women rape cases occur in the most unthinkable public places like moving buses, taxis, parks and picnic resorts. Teenagers lose their virginity while they are in school. Sexual orgies and worship of sexual organs in scriptures have moved from religious text to temple stones in form of nude sculptures and into the Hindu mindset. Nudity is a major component of the Hindu temple facade that has become part of their cultural DNA and psyche. India’s National Crime Record Bureau in its 2019 report claimed that a rape case occurs every 16 minutes. BJP’s rape mentality has created fear among the minorities with Muslim parents refusing to send their daughters to schools mostly located in dense Hindu populations.

Is India shining or it is stinking with shame? Modi earned condemnation for involvement in the killing and burning of Muslim properties in Delhi and the closing down of operations by Amnesty International. The European Parliament’s subcommittee on human rights warned India against targeting religious minorities. It urged Modi to meet his pledge to promote and protect human rights. Maria Arena, the chief of the EU human rights panel, said the protests over Citizenship Act led to “arbitrary detentions and unnecessary loss of life”.  She said that journalists and peaceful critics were being arrested under the “draconian counterterrorism and sedition laws”. AI reported that police were part of the gang that rampaged Muslim properties and killed 53. More were killed when Doval visited the area. A statement by Noam Chomsky, a US philosopher, and gender theorist Judith Butler, scholar Homi K Bhabha, writers Arundhati Roy, Meena Kandasamy, Rajmohan Gandhi, Amitav Ghosh and Salman Rushdi, filmmaker Mira Nair, historian Irfan Habib, journalist P Sainath, and actor Ratna Pathak Shah, among many others, expressed concern at the arrest of democratic voices in India.

Well if the butcher of Beirut, Iraq and Afghanistan can be honoured with a Nobel peace prize to wash the bloodstains on his hands, the days are not far when Modi will want one too, and he might succeed in getting one. He is the butcher of Gujarat. Once condemned and refused a visa by the international community for the state massacre of 2,500 Muslims and later hugged and praised as a champion of democracy, he is asking for a permanent seat in the UN Security Council. This will be a harder task to achieve than awarding the Modi Peace prize for legislating law and creating an environment conducive to killing Muslims.

Launching expensive space missions to Mars, while 50% of the population defecates in the open air and lacks clean drinking water, and the megalomania of usurping neighboring territories will bend India to a breaking point. The largest number of farmers committing suicide is not based in China or the US but in India. Modi is at war with the people who feed India. India under him is on a dangerous move, all the symptoms point to a lurking danger of a serious crisis. Economic failures combined with the aftereffects of the corona pandemic are bound to compel Hindus to flog and kill their minorities. The Muslims being the weakest will be the easiest target of Hindu fanatics. Modi and RSS need to win a third term, too.

A surgical strike across LoC would be very expensive and painful, so Modi might do it the cheap way by killing the Muslims in Delhi and Kashmir. His Hindutva philosophy, anti-Muslim and anti-Pakistan propaganda is a dangerous fire that could flare into a damaging nuclear war – a war that could freeze and end our world as we see it today. Kashmir Watch