Will work to strengthen ties with new US president: Munir Akram 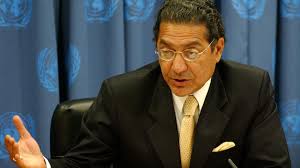 New York: Pakistan’s representative to the United Nations, Ambassador Munir Akram on Thursday has said that newly-elected president of United States (US), Joe Biden has brought changes to the policies of former president Donald Trump.

In a statement, the Pakistan’s UN representative has felicitated Joe Biden over becoming 46th president of US and pledged to work hard to strengthen ties with him.

He further expressed hope that the newly-elected president will devise strategies to boost cooperation and improve security situation.

The reaction came after Joe Biden took oath as president of the United States, vowing a “new day” for the United States after four years of tumult under Donald Trump who in an extraordinary final act snubbed the inauguration.

Biden, putting his hand on a family Bible, repeated after Chief Justice John Roberts the presidential oath — that he will “preserve, protect and defend the Constitution of the United States.”

Biden, who at 78 is the oldest president in US history and only the second Catholic, took office amid enormous challenges with the still-raging Covid-19 pandemic having claimed 400,000 lives in the United States. APP