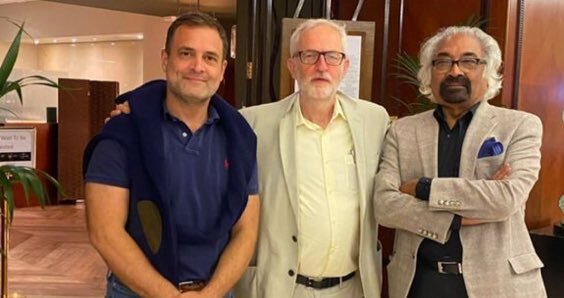 Earlier, the Indian Overseas Congress (IOC) posted a picture of Gandhi, who is on a visit to London, along with Corbyn and IOC chairman Sam Pitroda on Twitter.

Corbyn is currently a Labour MP and had served as leader of the opposition in the UK parliament from 2015-2020.

Union law minister Kiren Rijiju was the first of a number of BJP leaders to take objection to the Congress chief’s picture with Corbyn, alleging that the latter is “known for his hatred and dislike for India”.

The law minister also pulled up the Labour leader for advocating for “Kashmir’s secession”, ostensibly a reference to an emergency motion passed by Corbyn’s Labour party on September 25, 2019 which sought for the ‘right to self-determination’ of Kashmiris and for international observers to “enter” the region, following the Union government’s reading down of Article 370 of the constitution on August 5 that year.

At the time, the Labour Party’s move had garnered criticism from the Indian diaspora in the UK, calling it “misguided” and “uninformed”.

Corbyn’s stand on Kashmir seems to be a common thread in the criticism levied on Gandhi by BJP leaders. Party leader Kapil Mishra, too, took to Twitter to hit out at Gandhi for the meeting, mentioning Corbyn’s stance on Kashmir as well as his supposed “anti-India” and “anti-Hindu” stand.

Congress general secretary Randeep Surjewala responded to the attack on Gandhi by questioning the “TV media” complicity in furthering the “idiotic agenda of the government” and people like Kapil Mishra.

Political leaders have met in the past and will meet in future other leaders having divergent and opposite views to us…” Surjewala wrote in the first in a series of tweets. It should be noted that Surjewala refers to Kapil Mishra as ‘Kapil Sharma’ in the tweet, which he later corrected in a subsequent tweet.

Surjewala tweeted that Gandhi’s meeting with Corbyn was “neither a crime nor an act of terror as is being made out”, following which he said that the media should debate Prime Minister Modi’s past meetings and photos with fugitive businessmen Nirav Modi and Mehul Choksi.

Sharif Finally, the Congress general secretary posted a picture of Prime Minister Narendra Modi with Corbyn, asking “media friends” if the Prime Minister can be said to endorse Corbyn’s views on India. The Wire