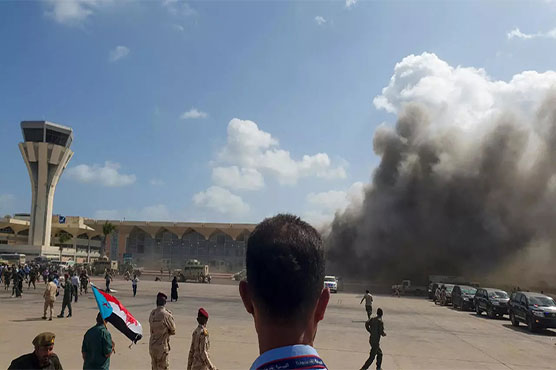 United Nations:  A deadly attack on December 30, 2020 on Aden airport in Yemen was carried out with missiles similar to those possessed by Huthi rebels and fired from locations under their control, according to a report submitted to the UN Security Council.

The attack killed about 20 people, including the deputy minister of public works, and injured more than 100 people.

“The airport was hit by three precision-guided, short-distance, surface-to-surface ballistic missiles carrying fragmentation warheads, likely an extended-range version of the Badr-1P missile, which has been part of the Huthi arsenal since 2018.”

The missiles were an attempt to hit the plane carrying government officials, as well as the VIP lounge, where a press conference had been planned.

They were fired from “facilities were under the control of the Huthi forces at the time of the attacks,” said a summary of the confidential investigative report obtained on Tuesday by AFP.

A last-minute decision to park the plane further away from the terminal building, as well as a delay in passengers disembarking, prevented further casualties, it said.

The southern port city of Aden is Yemen s de facto capital, where the internationally recognised government is based after being routed from Sanaa in the north by Huthi rebels. AFP